Racing With Race Cars (The Story of the Jewbaru That Could)

The only thing I really know about cars is that they are really fun to drive fast. I had the opportunity to learn this several times throughout my life. The first came was in High School when I tried to set the world record for the most times driving around a roundabout. I hit 116 times with some buddies before the neighbors called the cops and we learned the hard way that if you make a left turn for an hour straight, you are going to end up in a ditch when you try to make a right turn :-p

The second time was much more successful. I was at my friend’s house one day when his dad invited me and him to track day. His dad was a semi-professional race car driver and I instantly accepted. Racing a car was a bucket list item so the question was answered even before it was asked. Unfortunately I had one minor issue, I didn’t have a race car.

In fact, I didn’t really have what most people would even call a drivable vehicle. Instead, I had a 1991 Subaru Legacy station wagon. It had around 150,000 miles and had had three prior semi-abusive owners. That car (my first and last car to date) is best summarized by a simple story.

Clearly something was wrong.

I drove to the nearest auto supply store and asked to borrow a battery tester to see if something was wrong with the electrical system. The mechanic (I use the term loosely) measured it and told me that the battery was completely dead and that technically the car should not be running. He looked at me confused and recommended that I didn’t turn off the car. Bewildered and not excited to get stranded, I drove the barely functioning car 20 miles to my mechanic. Freaked out, I arrived and my real mechanic popped the hood. He investigated and told me that in addition to the battery being dead, the alternator had died as well. He told me that he had no idea how I had driven there. I smiled at him and told him it was a Chanukah miracle.

Much like the Maccabee’s original Manorah lasting for 8 nights on a tiny bit of oil, my car had made it 20 miles without electricity. :-) From that day forward that car, a Subaru, was named the Jewbaru :-)

I replaced the battery and alternator but that car never really was fixed. I had more than one time where I had to jump start the car by literally opening the hood and jumping on the engine. (That is not me being funny) It became sort of a routine.

Nonetheless, when my friend’s dad offered me a spot at track day, I had to say yes. He knew about my car and laughed.

A few days later, Pat (my friend with the cool Dad) and I prepared ourselves for an adventure. Unfortunately, the race day corresponded with Halloween so as sorority girls dressed in full halloween garb (or more accurately, lack there of) walked into our place, Pat and I walked out. We didn’t say a word but we were thinking the same thing. Track day better be worth it. 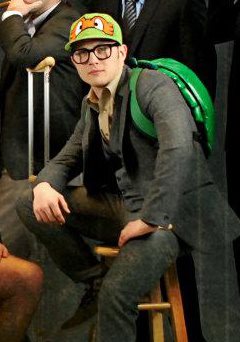 At dawn, we caravanned over to the makeshift track. The driving club had secured access to an old abandoned airstrip and had converted it into a track. One half was a straightaway used to see how fast the participates could go and the other side was a cones course used for demonstrating agility and skill.

I drove up in my Jewbaru and eyed all of the custom Miatas, Corvettes and BMWs. :-)

We filled out some simple paperwork indicating that we were not racing but were merely participating in “high speed driving instruction” and drove into the pit to meet the other drivers. The staff members painted a large four on my window (check the image at the top of the post) and it was official, I had arrived in car heaven :-)

When it came time to race, I couldn’t have been more excited and giddy. I put on a driving helmet, strapped on my seatbelt and failed miserably at getting the goofy smile off my face. We started at one end of the airstrip and waited for the flag.

Just like Nascar, they waves the flag and we were off. Kinda. I slammed down the gas but it took me about a full minute to hit full speed (95 MPH ;-p). In doing so, I watched as all of the other cars passed and laughed at me. It was like being the camera man in a cool car commercial.

At the end of the airstrip, I eased on my breaks (the speed shakes of the station wagon had been concerning) and instantly smelled the horrible smell of burning brake pads. lol

I made the left turn and entered the skills course. It took me a few laps but the skills side actually ended up being the more fun side of the track. I took my car to her absolute limit as I found the sweet spot between spinning out and drifting.

About six hours into track day, I took it a little too far.

I was blasting music and flying through turns when I found out what happened if you drift too much. Mid drift, I ended up blowing one of my tires and spinning out of control. I went from feeling like a badass to doing the pointless arms out “noooo” motion as a BMW came at my car going 80 MPH. Luckily the driver was skilled and missed me.

I drove back to the pit and one of the staff was able to patch my tire so I could get back and change my tire out for a spare.

It seems almost redundant to say but track day ended up being one of the most fun days I have ever had. :-) Pat and I ended up making it an annual tradition and until my car died (I totaled it on a different occasion when I hit an ice patch and ran into a unfortunately placed curb) it was one of my favorite days of the year.

RIP Jewbaru, I miss you!

This has nothing to do with this post but I am really enjoying this blog – Scarlet Wonderland Every post makes me laugh out loud or at least look around to make sure no one is reading over my shoulder. Also, happy Pi day! Rodeo, BBQ & Whisky: Yes Folks, I am Talking About Nebraska How To Make Friends In Foreign Cities