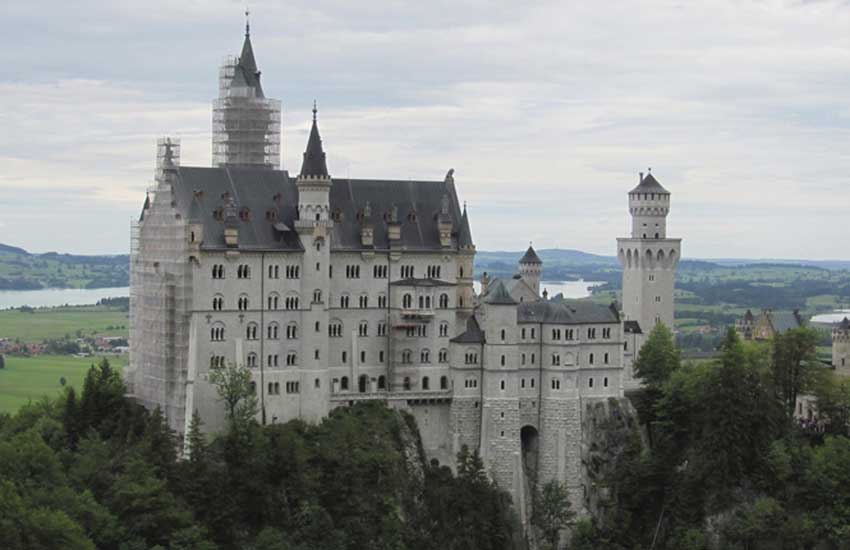 As I peered down my bucket list for the umpteenth time, I wondered aloud how this castle that I had never heard of had made it on to my list. I have seen a lot of European castles but none that were a destination in and of themselves. (Am I becoming a castle snob?) Apparently, at some point while I was crafting my life list, this suggestion had weaseled its way into my plans. So there I was figuring out the logistics for traveling to a castle I knew nothing about.

This wasn’t my first time I was off to visit a place I couldn’t pronounce.

I read some reviews about the castle and people seemed to really like it. Apparently it was something special. Excited, I booked my flight to Munich, Germany. This was going to be a weird one. I was a single guy who had just booked a solo tour of a fairy tale castle.

Upon landing, my first impression of Munich was that is was extremely green. The people seemed cold but not rude and there were BMWs and Mercedes everywhere. I checked into my hotel and immediately left to go explore the city and to find some food. I found the first Bavarian restaurant I could and ordered the ‘Munich sampler’ and a pretzel. It seemed like a good idea but wasn’t what I was hoping for. A cute but cold girl in lederhosen (heh) served me a stale pretzel and some thick skinned sausages. Meh. I finished my meal and went exploring. I did however see this guy, which of course made me laugh: The next morning I woke up early and made my way to the central train station. I was happy to see a huge variety of food. I settled on a mozzeralla and tomate croissant (not pictured because I ate it too quickly) and a sausage sandwich thing. I ventured off to the tour area and checked in.

My tour guide introduced himself to the small group. Now, I am no geography wizard, but I am pretty sure New Zealand is not in Germany. Ladies and gentleman, my tour guide was a carbon copy of Jemaine from Flight of the Conchords. To say I was excited would be like saying bacon is a generally desired food on the Internet. I haven’t owned a TV in a couple years but I have watched and rewatched the first two seasons of this show (the rest of the seasons sucked). The tour guide talked about a bunch of things but I kept thinking of my favorite moments from the show. It was awesome! The castle tour was already off to a great start and we hadn’t even left the train station yet.

We hopped on the train and I sat down to finish reading Into The Wild (affiliate link). (I am surprised Christopher McCandless didn’t try harder to save himself. I don’t think he was suicidal but I do think he was favorable toward the idea of dying in the wilderness. The ending seems off to me. I enjoyed it thoroughly but didn’t identify with Chris after the half way point of his journey) Lost in thought, I arrived two hours later in the small town below the castle. We started the fun hike up the mountain and I started talking and making friends with the other people in the group. Everyone was excited to be there and we were all in good spirits.

Before I got my first real glimpse of the castle, I saw this sign: I had heard comments that it was this castle that Walt Disney had based a lot of his work off of. This solidified that in my head.

Knowing this castle was an inspiration for a genius made me even more impressed. We all sat down in a small field and Jermaine explained the history of the castle.

(I am going off memory here, so give me some wiggle room with the details)

The Bavarian King Ludwig II had had the castle built nearly 100 years ago. He was made king when his father, a strict and scientific leaning man, died earlier than expected. In his young age (19) he was a mediocre leader and was more interested in the arts. Particularly, he enjoyed the fairytale-esque operas of the time. As he aged, he allegedly started to lose the battle against mental illness and started to lose touch with reality. (I think he was just really into fairy tales and as King did give a damn about what others thought about his unorthodox world view.)

As a King he had a sizable family fortune. He distanced himself from the Bavarian people and started work to build the fairytale world he saw in his head. His started construction on three extremely elaborate castles (complete with false grottos and a mechanical swan boat) and shortly before the last two were completed he was declared insane by other leaders in the kingdom. They had him removed from the Neuschwanstein castle (which he was living in even though it was still under construction) and put him under house arrest in another castle. (Sounds like a hard life…)

On his first day under house arrest, he went walking with the psychologist who had declared him mentally ill. He convinced the guards to give them some private time and continued the walk toward a nearby lake. Several hours later, the guards found both the King and psychologist floating dead in the lake. To this day, no one knows exactly what happened.

Six weeks later construction was halted on the Neuschwanstein castle and it was opened up as a museum.

After reading Into The Wild, this was an interesting angle for me to think about. This King had ultimate power until he succumbed to his own mind.

I was excited that the castle had an interesting story behind its construction. It was more than just built to show off to other countries. It was built because the king wanted to live the world he saw in his head. It had a bizarre inspiration and took the fairy tale idea to new heights.

After hearing the background, I was even more impressed with the castle. The whole group then took a little hike toward a bridge which overlooked the castle and the surrounding forest and lakes. This was my first real glimpse of the castle. Damn. That is a really special castle. In fact, this was the most impressive castle I had ever seen. It was really jaw-droppingly beautiful. Damn.

As I stood there I listened to the dozens of people around me complain about the scaffolding on the castle. (It is under construction in order to fix some foundational elements) I have visited lots of monuments/tourist destinations that have been under construction. It doesn’t bother me anymore, it is just part of the life cycle of the architecture.

We then went to the castle itself. I also saw this which I can’t really explain: Eventually we started our tour of the interior. The inside was as elaborate and beautiful as the outside. It included frescos, giant chandlers, a man-made cave and lavish furniture.

Unfortunately, the tour guides were extremely strict about not allowing photos so you are going have to check out the inside yourself.

I left feeling super energized. I am normally for minimalism but in this case I could certainly see the case for maximumism. This place was over the top in every way and it way absolutely fantastic. The King had succeeded (with the help of an incredibly talented designer, architect and building crew) in making his vision of a magical castle a reality.

Below is a photo I snapped of a photo of the castle taken during winter. We ended the tour by walking down a nearby gully and into a large field. Damn. Even the walk away from the castle was spectacular.

Looking back on this life list experience, I was reminded of something I had forgotten.

Most of the time in life, the best of something is only slightly better than the second best. Be it a race horse beating the competition by a fraction of a second or a soccer team scoring one more goal than the opposing team. This slight sliver is what makes the difference.

The Neuschwanstein castle reminded me that this is not always the case. :-)

Occasionally, there is a circumstance where the best is immeasurably better than the competition. This is particularly exciting when this happens. Be it the Pyramids of Giza compared to the clay huts of the time period or landing on the moon when others were still figuring out commercially viable air travel. These are the creations and experiences that should fill bucket lists.

Too often, I strive to be the best by comparing myself to the current leader. This is like climbing a mountain with the sole intent of planting a flag.

While this approach often leads to success, (the top of a mountain either literal or metaphorical is after all the top), the people who truly inspire me are the ones who climb for different reasons.

These are the people who are succeeding based on their passion for creating what the world could be rather than what they could be.

That was the reminder I needed.

Throughout my life list journey, I have seen and experienced many of the best things the world has had to offer. Surrounding myself with the best has taught me a lot. While previously I thought the danger of this experience was becoming jaded, the Neuschwanstein castle taught me about a more inhibiting danger. Seeing the best of something creates a benchmark for the top. The most inspirational type of people are the ones who see the top, ignore it and create their own vision of what the best can be. These are the rare people who really change the world. This is the type of person I want to become.