I was sitting in a bunk in a small shack up at 10,000 ft on Mount Rainier. My climbing guide was telling a story about how his climbing partner had written a book about the two of them climbing Everest together and finding the body of a climber friend of theirs. To my left was an FBI agent who looked and acted exactly like the main character from Alias. Next to her was a Boston marathoner who also happened to speak five languages. To my right was another guide who had climbed the Seven Summits (most of them multiple times) and had just returned from climbing Vinson Massif in Antarctica. I was completely out of my element. I always have at least one life list item planned out (event ticket, hostel and travel) before completing my next list item. This way, I keep myself in a productivity loop. For Mount Rainier, this required planning six months in advance. Even still, I ended up getting the very last spot available for the climbing season from any of the three major climbing companies on the mountain. I emailed the required forms (“you may die and it is not our fault”) and moved it to the back of my mind. “I’ll let future Danny worry about it, that guy is a sucker”.

Fast forward to last week and a slightly freaked out present version of Danny.

It was for all intents and purposes the first day of summer weather in Seattle (It was also mid-August). I drove out of the city and could see the mountain from 60 miles away. It loomed in the distance smirking at me, “I am lot bigger than you remember, aren’t I?” I arrived at Base Camp two hours later and listened to the owner of the climbing company explain again that we might die.

“The crevasses are just scary in movies, unless of course you fall into one. But that rarely happens. What you need to be worried about is falling rocks and ice, that shit is scary.”

We woke up early the next morning and started our ascent up to Camp Muir, the launching base for the summit attempt. “If you feel tired after this climb, that is normal.” It was only about 4 miles but was both entirely snow and ice, and had an elevation gain of 4,500 ft. For those unfamiliar with mountaineering, this isn’t super difficult but it is a slow process. We put on our gear (a bit over 50 pounds) and started the climb. It took us about 4.5 hours. We arrived at the top with slightly less air and cooked up our dehydrated noodles. The next day would be spent doing more training so we could get used to the 10,000 elevation. We went to sleep at 6:00 PM in small tents and half slept as we listened to sounds of the mountain around us. At midnight we all got up and prepped ourselves for the day of climbing. Our guides had checked the weather forecast and asked us to prepare for a storm. We got out of the bunkhouse/shack and saw the storm brewing below us.

The climb was broken down into approximately hour long stints of climbing separated by 15 minute breaks. After the first break the sun started to show itself a little bit and the wind started to pick up. The mountain was starting to wake up and wasn’t happy to see a group of too-cool-for-school chumps trying to reach it’s summit. The temperature was about the 10 degrees F but the wind chill felt like negative 50. It was for this reason that the breaks were limited to 15 minutes. After the first section, we reached the beginning of Disappointment Cleaver, the most technical part of the climb. With ropes, we quickly climbed past first the falling ice field and then the falling rocking field. We then proceeded to climb up the rocky switchbacks of the cleaver itself. Each step up the rocky mess was half a step back. Using my ice axe more like a bladed cane than a manly mountain ninja, I hobbled up the tricky path as a man with something to prove. This was a hell of a lot harder than it looked in the IMAX films. I secretly wished I supplemented some of my marathon training with some stair-climbers at the gym. Not An Easy Climb

At the end of the cleaver, the FBI agent was forced to turn around. Altitude sickness had taken control and the nausea mixed with the labor and cold was too much. The rest of us continued humbled, she was one of our stronger links and we had not yet felt the altitude sickness ourselves. It was a treat we could look forward to later.

The next series of climbs took us higher onto the mountain (a good sign when trying to summit something) and into more alien terrain. The snow stopped being flat and instead looked more and more like scenes from The Nightmare Before Christmas. At the same time, the air got thinner and the temperature got colder. 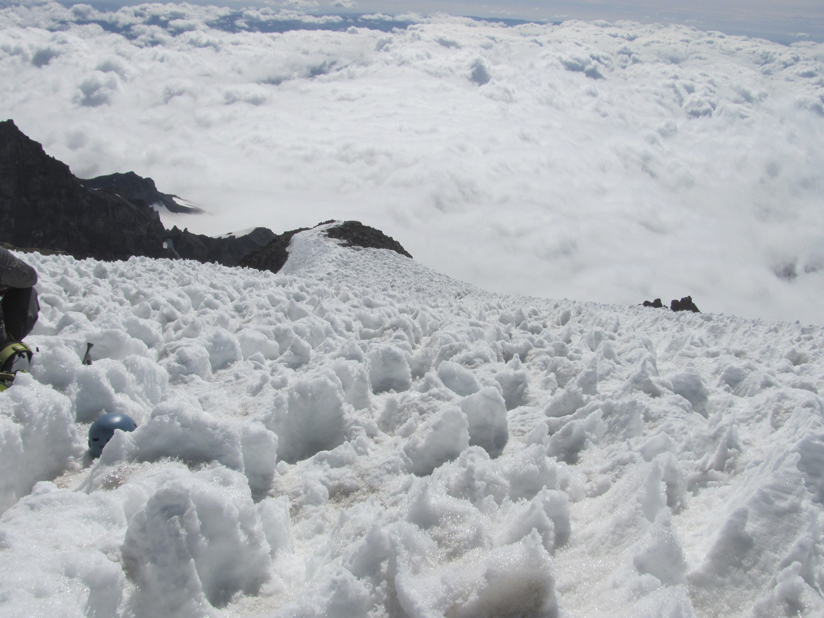 During the third climb cycle, I had a distinct moment of clarity. What a crazy situation to be in. I was about 12,000 feet up a mountain I had stared at from a far many times but found myself in an entirely alien landscape. 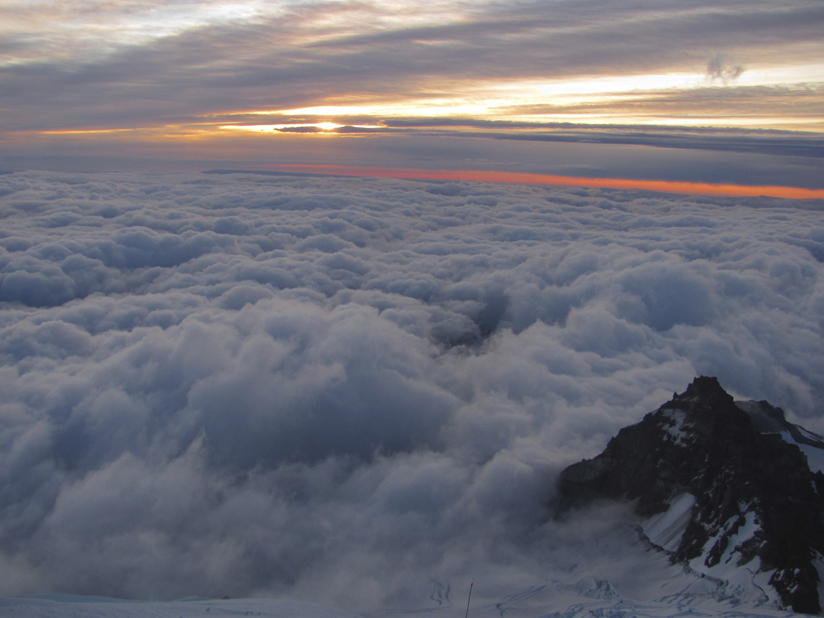 A Moment of Cold Clarity

It was a few minutes later that I started to feel the altitude sickness myself. I had been keeping tabs of my breathing and heart rate and started to notice my heart pounding harder and faster than normal. The thin air was getting to me. The angle up the trail was steep (roughly 40 degrees and getting steeper) and with my five layers, my core was hot while my face, hands and feet were literally freezing. I couldn’t regain my breath and forced myself to remain under control. I was in the middle of the rope team and turning back wasn’t a much better option than simply summiting and resting up there. I got sever tunnel vision (the relatively small amount of oxygen combined with the hard exercise was starting to slowly suffocate my brain) and forced myself to focus on my steps. Pissed off, I cussed out the mountain in my thoughts. It was indeed a worthy adversary.

We continued to climb for what felt like hours (well actually it was about two more hours) and paused to take our breaks. My Gatorade was now in slushy format and the sandwich I had packed was completely frozen. I gnawed at it like a crazed mountain animal. (nom nom nom)

At this point, I was feeling optimistic but the nausea and headache was wearing me down. I didn’t dare look up the face of the mountain. I didn’t want to know how much more climbing we had left.

We got into the final stretch and stopped only to make sure everyone made it over a ladder that had been placed horizontally over a rather large crevasse. I focused solely on moving one foot in front of the other at a painfully slow pace. I still hadn’t regained my breath and I could sense my thoughts getting cloudier and cloudier. I was pretty sure I would pass out soon.

At the end of my rope (climbers joke), we made it to what I thought might be summit. We crossed the rocks but I immediately saw another point farther ahead. Beaten, I slowly moved forward. Halfway to the next visible peak, we stopped. We were there.

Mount Rainier is a volcano and at its top was a crater. I was standing in the middle of the crater and was surrounded by its ridge (thus the high point I could see). I had officially made it! 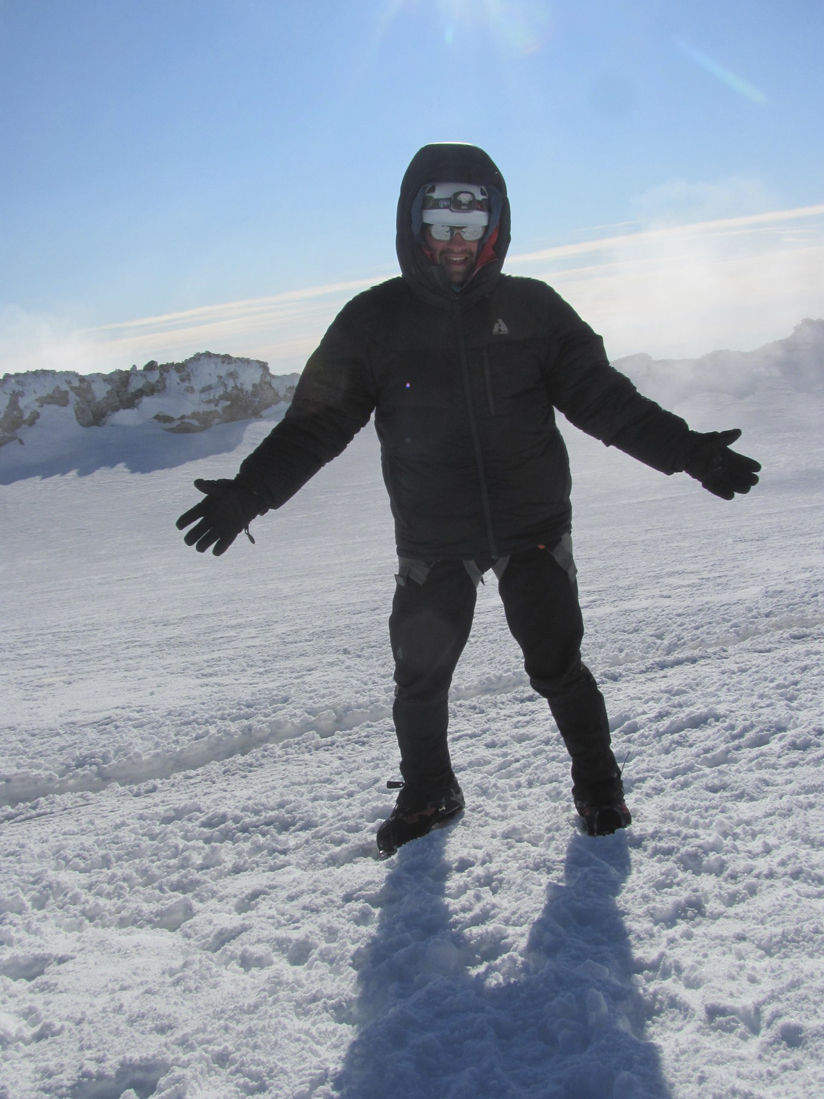 We took off our packs and I immediately preceded to take a well earned piss right in the middle of the crater. (Dibs! My Mountain!)

The guides told us not to lay down as it was extremely important to stay warm. We put on additional layers and Antarctica style mittens. I sat down and forced myself to eat GU, dehydrated fruit and the frozen gatorade. After about 20 minutes I started to feel better. We spent about 45 minutes at the summit and took as many pictures as possible. Looking Over the Crater Ridge of Mt. Rainier

After celebrating, we turned around to start our descent. We were only half way done. Although we moved at twice the speed it still took us about eight hours (with breaks) to make it back to Paradise, the aptly named park we had started at three days prior. It had been a hell of day and we were all exhausted. We looked back up at the mountain and beamed. We had done it and we would never look at the mountain the same way again. What Do You Want To Do With Your Life? 3 Questions For Finding Your Answer