I work up, rolled over in bed and reached for my laptop. In my inbox sat my least favorite type of e-mail. The sender was British Airways Customer Services and the subject line read “Cancellation”.

Under normal circumstances, major airlines will automatically rebook you on routine flights so as soon as I saw the subject line, I knew something was awry. I called up British and the support agent said in a very friendly British accent “All flights in and out of Spain have been canceled due to a transportation union strike”. Indeed something was awry!

I chuckled to myself and opened up my bucket list. It looked like I would be checking off a different item today. Prague caught my eye and I made the appropriate arrangements with the customer service agent.

I then rolled out of bed. Apparently I was going to the Czech Republic that afternoon, not Spain. :-)

Close to 20 hours later I arrived in the Czech Republic with a smile on my face. I wasn’t sure what currency the country used (Czech Koruna), what language they spoke (Czech) or any places to visit in the country. All I knew was that Prague was on my list and it was somewhere I needed to be. I hoped on Facebook and asked my friends if they had any suggestions. Luckily, the suggestions rolled in quickly and I had a full weekend worth of ideas before I even made it to my hotel. (Thank you Scott, Matt, Daniel and Rod!)

I have a pretty solid routine when I get to a new city. I first take out $75 dollars worth of local currency, check into my hotel (which I usually get on Priceline) and proceed to intentionally get lost. As I have mentioned, I am a big fan of walking. It clears my mind and makes me feel good. When I get to a new city, I generally choose one direction and just walk until I see something that interests me. If I get too lost, I take a taxi back to my hotel (which I grab a business card from when I check in) but that rarely ever happens. This was my favorite Czech statue One of many open squares in the the old city I didn’t sleep that night (jetlag) but I rolled around in the bed for hours with a full stomach (beer and pheasant) and a smile on my face. The next morning, I oriented myself on a map and went to a restaurant that was recommended to me by a friend on Facebook. He was right, it was one of the better lunches I have ever had. I then spend the rest of the day split between working in cafes and exploring different areas of the city. It was perfect so I ended up spending the next two days following the same agenda.

Prague was fantastic. The city was beautiful, the people were gorgeous and the food was delicious. I could not have been any more impressed. I will most definitely be going back and exploring more.

On my last day, I jumped out of bed (still couldn’t sleep due to jetlag) and grabbed a taxi ride to the airport. It was finally time to go to Barcelona. I noticed it was my favorite holiday (April Fools Day) and I wrote up a quick post while sitting in the terminal. I smiled at the Google pranks and posted my own contribution.

That day ended up being very long.

The great thing about traveling is that it forces you to experience emotional peaks and valleys. You lose out on convenience in exchange for feeling a wider range of emotions. It is not always a fun experience but the highs are well worth the lows.

When home, I find that I develop patterns and routines to optimize my days activities. I know which bus to take, where to eat and what to do with my laundry. While traveling, I don’t have any of this place-specific experience and generally have to pay for it with the exceptional high price of my time.

That travel day ended up being a pretty rough one. I hadn’t slept in two days, both of my flights were delayed and I had an unexpected four hour layover. Once I finally made it to Spain, my credit and debit cards didn’t work (I later found out it was because Visa’s international system went down. That is not a typo) which meant I couldn’t pay for the train ticket I needed. I eventually scrounged up enough Euros to pay for the ticket by converting the change from the four currencies I had in my pockets. When I finally got on the train, it left the station and proceeded to shutdown mid route.

I smiled to myself. While this stuff is stressful, it is just part of the experience. You go with it the best you can and figure out how many levels deep your plans can go. (By this time I was on something like “Plan H“).

It turned out that the train was running Windows XP so when it eventually restarted the passengers were greeted by the familiar Windows startup sound and loading image. I think I was the only one who thought that was really funny. I eventually made it to the train station but because the train had stalled, the station was closed. I walked around for about 45 minutes trying various exits only to find they had been chained shut. :-/ My American trained brain worried about the fire hazard :-)

I eventually found my way out by teaming up with some non-english speaking co-conspirators and together we “made” a new way out. It worked but I then found myself lost in Barcelona without any way to contact the owner of my rental.

An hour later I made it to my final destination and cracked a beer with my new landlord. We swapped stories about the transportation strike and Prague and I eventually made my way to my new bed. Again, I didn’t sleep that night. I was too tired. I am still in a daze due to not sleeping well but am slowing getting back to normal. For context, in the last three weeks I have flown from Los Angeles to Maine, Connecticut back to Los Angeles, Los Angeles to London, London to Prague, Prague to London and finally London to Barcelona. It is no wonder I haven’t been sleeping. My body has no idea where I am :-)

The next day I followed my new city routine and got lost in Barcelona. Very sexy white guy on a beach in Barcelona 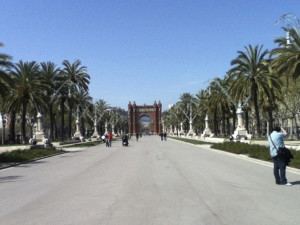 So far, the city has been absolutely fantastic! It has world class beaches, delicious food (tapas FTW), tons of cafes and a lot of very friendly people. From what I can tell in my early review, Barcelona has all of the pros of Buenos Aires with the added benefit of stability.

Last night I went to watch the Barcelona-Milan match at a local pub with my new landlord. The atmosphere was great and I met a lot of very fun and genuine people.

Late in the night, I asked the bartender for a round of shots for my new friends. He smirked at me and told me to get them myself. He then motioned for me to take over the bartending. With a big goofy grin, I hopped over the bar and served all of my new friends drinks. This was Barcelona, it was time to settle into my new home.