Like many people, skydiving was the first activity I thought of when I started creating my bucket list. It is high adrenaline, something most people don’t do in their lives and is relatively accessible (you just need a sky, access to a plane and if you are smart, a parachute). The first time I jumped out of a perfectly good airplane was when I was 18 years old. It was a birthday present to myself and at the time seemed like a really good idea. I have since jumped out of about 20 other equally working planes.

So why so many planes? In case, you are a new reader, it is worth noting that when I find something I really like, I tend to get obsessed :-) At the time I was trying to get my skydiving certification. A certification allows you to jump solo and teaches you the skills you need to use in order to perform stunts and jump with other people. It also gave me the opportunity to learn from some amazing and inspiring people.

My instructors at the time had several thousand jumps each and were masters. When they hit terminal velocity, they had so much control over themselves that they looked like they were swimming rather than falling. If they wanted to move twenty feet in any direction, it was no problem. They simply shifted part of their body and off they flew. If they wanted to do the same thing but do it upside down, they would simply move a different part of their body and off they went. It was really a work of art.

Throughout the certification process I learned to do controlled flips, fly backwards, gain speed in barrel rolls and most importantly, return to the normal stable position. It was freaking awesome.

The scariest part of learning to skydive solo is, as you might expect, the first jump. The problem is that there is no way to learn how to land a parachute other than by actually doing it. This means that on your first solo jump, the instructor can pull your parachute for you but it is completely up to you to navigate and the land. This is the part where many people break their legs.

For me it wasn’t the parachute that proved tricky, it was the actual jumping out of the plane. The beginning of every single jump started exactly the same way for me. My feet would leave the wing and I would black out for approximately 10 seconds. The adrenaline proved too much for me and I don’t once remember actually seeing the bottom of the plane :-) In fact, the same thing happened when I went bungee jumping. It is just a weird quirk of mine. Luckily, I’d come to 10 seconds later and be under control.

Throughout the process, I had been going through the training with some friends. Usually we could go in the plane together but on this particular jump, we couldn’t both fit. Instead my friend Pat went up and I watched from the ground.

From 12,000 feet you can actually see individuals jumping out of a plane. I watched the tiny spec that was Pat jump out of the plane and free fall for about 30 seconds. He pulled his chute and almost instantly it was clear something was wrong. The parachute came out incorrectly and quickly became tangled.

I watched from the ground and had no idea what to do. I was literally watching my friend die. It was his first solo jump.

Pat did as he had been trained and cut the parachute free. He then went back into free fall. 5 seconds later, he pulled his reserve parachute and was again under canopy. It opened without any problems and he safely floated down.

I jumped in a truck and we sped over to his landing area. When I reached him I gave him a huge hug. He was confused and was upset that he didn’t pass the training challenge. :-) It reminded me of the time when I saw a news van hit a person crossing the street. The van stopped and the person who had literally just flown 10 feet and lost their shoe, got up and apologized to everyone who had just seen the accident. The human animal is a funny thing in times of trauma. Pat was similarly stunned.

We drove home and we talked about the experience. The depth of what had happened started to sink in and he became slightly upset. He wanted to continue the training course but I decided I had seen enough. I had already completed my bucket list item (go skydiving) and I didn’t want gravity and a bad parachute packing job to get in my way from the finishing the rest. Twenty jumps turned out to be enough for me. 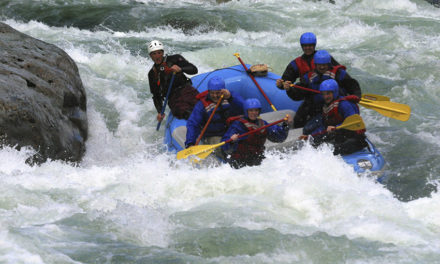 The Moment I Realized I Was Going To Die Astronaut Training: My Coolest Experience Yet