Easter Island: Exploring The Most Remote Inhabited Place On Earth 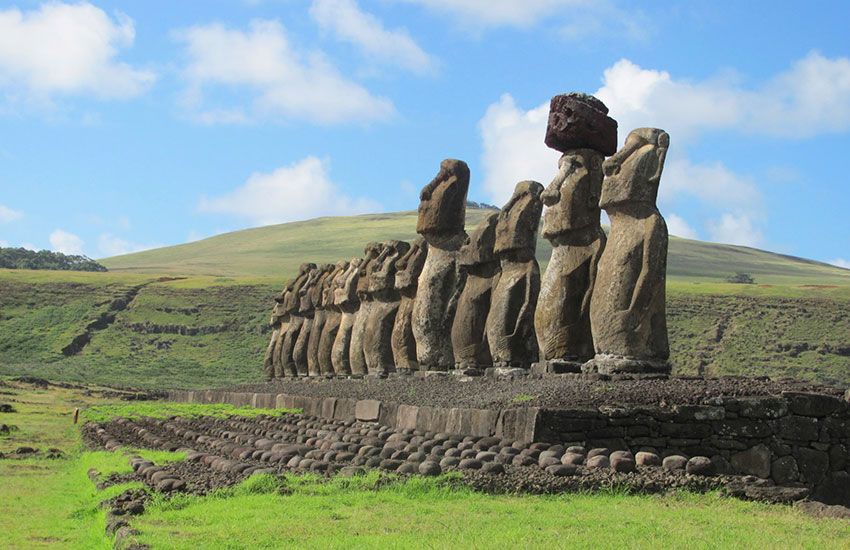 In the middle of the Pacific Ocean, somewhere between New Zealand and Chile, lays a small island with a mysterious past. I sat reclined in a chair in this isolated tropical paradise with a smile on my face. I was 1,200 miles away from the next inhabited island and had reached a new degree of the middle of nowhere. I checked my computer, sure enough I had WiFi. It seemed the Internet really is everywhere. I tweeted my location and closed my eyes to go to sleep. The next day I would go explore what would eventually became my new favorite bucket list item, Easter Island.

It started in Santiago, Chile. As you can imagine, there are not a lot of flights to Easter Island. In fact, only one airline (LAN Chile) flies to the destination and it recently halved its schedule to the island. While some cities rely heavily on tourism, Easter Island literally sustains itself on tourism. The same commercial flights that bring tourists also carry the cargo necessary to supply the island. It has no sea ports so almost everything that enters or leaves the island does so on the occasional 1:00pm LAN flight.

In order to catch one of these scarce flights, I found myself alone in the Santiago, Chile airport at four in the morning. The airport was empty and I was alone in an enormous terminal. I walked around half asleep and eventually stumbled across the only other person in the room. He was working at a Starbucks. Smiling, I ordered a muffin.

He rang it up and said “dos mil, por favor.” (two thousand, please)

Confused, I looked up. That sounded like an expensive muffin.

I reached into my pocket and pulled out 5 US dollars. He smiled and gave me change back. The exchange rate was 500 to 1. I grinned, wolfed down my muffin and fell asleep under a row of seats. My flight was in 6 hours and I was pretty sure, I wasn’t going to sleep much that night.

I caught the surprisingly full flight and read more about the history of the island. It’s story was as sad as it was interesting.

The island is made of three volcanoes. At some point in the distant past, a meteor hit the island and in its crater unearthed a deep layer of volcanic rock. This rock turned out to have properties that made it especially good for carving. An unintended social experiment, the island’s ancient inhabitants had organized themselves into competing tribes. Each tribe specialized by focusing on one particular industry. The most bountiful of the tribes specialized in carving the exotic rock into human shapes which they called Moai. The Moai were the reason I had come to the island.

During the island’s history, the carving of Moai became an obsession of the tribes. Each tribe competed to own the greatest statue. This indirectly led to war and eventually to cutting down of all of the trees on the island. (They had used the trees to transport the Moai which weighed up to 80 tons. Scientists still don’t know exactly how they moved the statues as they never found evidence of the invention of the wheel. That aspect remains a mystery). The cutting down of all of the trees on the island destroyed the natural plant cycles and eventually led to famine. Bad went to worse with the introduction of Europeans to the island and the corresponding introduction of small pox and selling of natives into slavery.

Currently, there are a few thousand people who live peacefully on the island. They are Chilean citizens and are descendants of several different ethnic groups that eventually made their way to the island after most of the natives died out.

I landed at the airport, stepped out of the plane and was taken back by how hot it was. It was the middle of winter in the southern hemisphere but the island didn’t seem to care. It was hot, sunny and fantastic.

I was greeted at the airport by the guy who ran the hostel I was staying at and he gave me the 5 minute tour of the only town on the island. It was Sunday so most places were closed. I spent the day walking around the town and meeting people. Most of the inhabitants on the island spoke multiple languages and tended not to use much modern technology.

The next day I woke up early to start the tour of the Moai. There are 900 known Moai on the island and an unknown amount buried under the island’s surface. We traveled in an old Volkswagen van and drove to the various sites around the island. The highlight was driving to the crater where the majority of the Moai stood. Driving up to the crater on Easter Island Getting an idea of scale. 2/3rds of the statue were underground. Each Moai has a similar but different face. The Moai are massive More Than Massive, They Are Plentiful Inside the Crater There Are Even More Moai Group of Moai For Lined Up Religious Ceremonies I finished my long day both exhausted and exhilarated. I had spent the entire day witnessing the physical results of human passion (and greed). The statues had been massive and extremely detailed. Not only did they carve them out of solid rock, their creators had also transported the enormous statues across the entire length of the island.

Whether you are in densely populated Mexico City or on the extremely isolated Easter Island, the results of passion are everywhere. Passion, it seems, is the force that shapes our world. Be it as obvious as carved statues, or as hidden as weak WiFi signal in the middle of the ocean, passion drives progress and allows us to overcome stagnation. Some people spend their entire lives asking the world why they are here. I like to believe the answer surrounds us. The reason we are all here is to make a difference. It is to identify what makes us, us, and use this to make an impact on the world. This doesn’t have to be something huge and traditionally noteworthy. The only requirement is that the contribution should be made from pursing something you love. It should come from pursuing your passion.

What You Need To Know To Complete This Bucket List Item: